It’s a shame that it’s currently somewhat unfashionable for odd or unusual bands and artists to use country music as the foundation for their sound (that is, unless they’re operating within the genre). From bands like The Grateful Dead and The United States of America back in the sixties and seventies all the way through to band 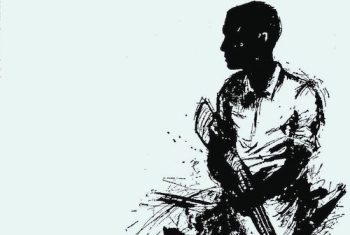 s like Low and Black Rebel Motorcycle Club in the nineties and noughties, country has proven time and time again that it is a truly fertile bedrock upon which unique musical explorations can be erected. But nowadays, country tends to be a style avoided by bands and artists interested in hybridised musical forms, and is instead contained within its own generic pigeonholes.

This contemporary avoidance makes the rerelease of Knife in the Water’s Plays One Sound and Others all the more interesting and all the more enjoyable.

Originally released in 1998, Plays One Sound and Others is both an archetypal product of its time and a thoroughly convincing demonstration that the dictates of country are a fitting framework for those looking to push the musical envelope, rather than a style to be avoided. Featuring such stereotypical instruments of the genre as brushed drums, pedal-steel guitars, steel-string acoustic guitars, pianos and organs, it uses this instrumentation not to help us drown our sorrows in true country-style but to instead create stark musical spaces that vacillate between introspection and expansiveness, between loneliness and community, between an almost-ambient quietness and a kind-of barely restrained intensity, without ever being overtly loud or aggressive.

Title track ‘One Sound’ sets the template for the remainder of the album, its hushed vocals and softly-plucked guitar contrasting with washes of organ and heavily layered droning guitars that are almost Velvet Underground-esque in their density. ‘Seat of Pity’ is like a ballad from a land where Ketamine is part of people’s daily diets, so fragile and tenuous is its form and Knife in the Water’s playing. ‘Norma’ is an almost-haunted duet, the dual voices supported by a single gossamer-thin guitar line and pedal steel wails sad enough to break your heart. And closing track ‘Careening’ is simply perfect, moving from a barely audible whispered vocal and gentle accompanying guitar to a full-band drone over the course of almost ten minutes, and doing so at such a glacial pace that you’re barely aware of this progression until it overwhelms you.

If you’ve got even a tiny bit of room in your life for what might be called ‘alternative’ country music, then you need this record in your collection.